Predictions for the 2018 Proxy Season

We will continue to publish periodic papers exploring key governance topics, voting trends, and other proxy-related issues throughout the proxy season. We will also highlight CEO Pay Ratio disclosure in our bi-weekly Say on Pay report.

In conjunction with the publication of our first report, we have four predictions for 2018:

Prediction 1: CEO Pay Ratios will have little impact on Say on Pay vote results in 2018

2018 marks the first year of CEO Pay Ratio disclosure as mandated by Dodd-Frank legislation. The Wall Street Journal, New York Times, and other prominent publications wrote articles discussing the extent of the discrepancy between median employee and CEO compensation in anticipation of the new disclosure, and we expect that the CEO Pay Ratio will continue to receive frequent media coverage throughout the year. That said, we believe that the Pay Ratio, and its media attention, will have little impact on Say on Pay voting during 2018.

ISS has stated that it will not consider the Ratio when making Say on Pay recommendations at this time. Further, the CEO pay Ratio only mandates the disclosure of one new data point –the median employee’s compensation –since CEO and other NEO compensation has already been thoroughly disclosed for years.

Investors take the whole executive compensation program into consideration when deciding how to vote on Say on Pay, including the structure of the program and metrics, realizable pay, and the compensation levels of all proxy-disclosed executives. These other factors are not reflected in the CEO Pay Ratio, which renders the new data point a small part of the overall picture.

Prediction 2: Voter support for environmental proposals will reach its highest level in 2018

Voter support for environmental proposals in 2017 was 28%, the highest level of support in a single year, and only two points shy of our 30% prediction made at the beginning of the 2017 proxy season. Environmental-related issues continue to grow in prominence as the current government administration rolls back regulations and agreements that helped to prevent climate change and protect the environment. We expect the political environment to prompt continued environmental-related activity that will impact voting trends. 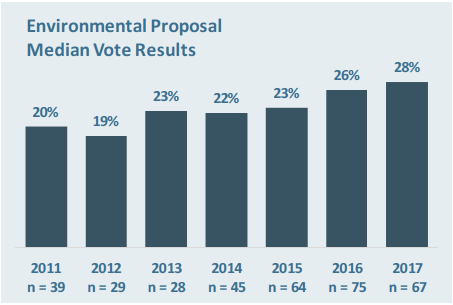 Shareholders, investors, and proxy advisors are pushing environmental agendas more strongly. For example, BlackRock has made public statements calling for increased accountability by the companies in which they invest and has introduced sustainable funds that are designed to match the performance characteristics of traditional investments while targeting specific environmental impact objectives. Proxy advisors ISS and Glass Lewis have launched their own comprehensive Environmental, Social & Governance (ESG) ratings tools that many asset managers, funds, and other shareholders use in their investment and proxy voting processes.

We believe that the increased focus on environmental issues will cause vote support for environmental proposals to increase for a fourth consecutive year and set a new high in 2018.

Prediction 3: S&P 100 companies will continue to have lower Say on Pay results than the remaining Russell 3000, and the gap will widen in 2018 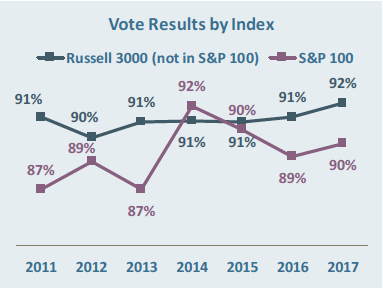 Most companies, regardless of size, focus on implementing strong governance controls. However, S&P 100 companies carry the additional burden of name recognition, which causes greater scrutiny when they deviate from market-normative practices. In addition, the particularly competitive talent market at the largest and most recognizable companies relative to the broader Russell 3000—we believe that Say on Pay vote results for both groups will continue to diverge in 2018.

We published a gender diversity paper in January that focused on the disconnect between representation and shareholder support of female director candidates. Women held 16.5% of board seats in the Russell 3000 at the end of 2017, up from 15.1% at the end of 2016 and 13.9% in 2015. We believe progress towards gender parity will continue to improve and female board representation will reach 20% by the end of 2018. 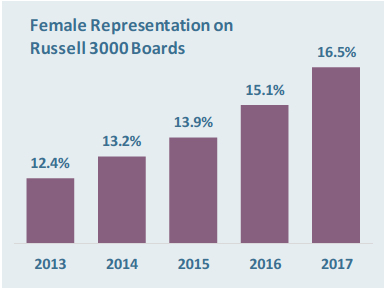 During 2017, State Street advanced board diversity and quality as the foundation for good governance and positive investment outcomes. In conjunction with their installation of the “Fearless Girl” statue, State Street sent letters to 600 companies informing them that it would vote against the chair of any nominating committees whose board had no female directors or candidates.

Pressure from investors and proxy advisors has accelerated progress toward gender parity in recent years. As diversity initiatives become more widespread, companies in the Russell 3000 will likely make a more concerted effort to nominate female candidates to fill newly opened board seats.

To view more of this report, download the PDF.